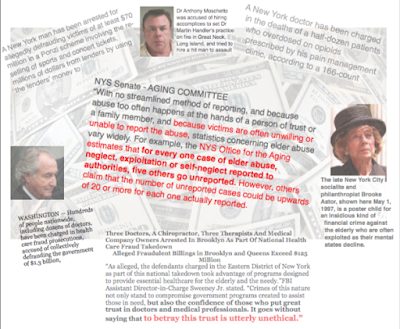 Advocates of Assisted Suicide bills claim that the bills are safe because of Safe Guards built into the Bills. Is this true or not? New Yorkers know first hand about fraud, corruption, scams and con artists who are continuously at work, so why should New Yorkers trust someone who claims the bills are safe? Should we trust doctors who have a license to kill? We know corruption exists and just because there is a law against something, does not necessarily mean people follow that law.

Let's add little more light on this topic of corruption. Those advocates of Assisted Suicide, for example; Dr. Timothy Quill, on October 3rd, 2017 gave a presentation at the Northwell Medical school on Long island, NY. He claimed that physicians are already helping their patients to die and that this should no longer be kept a secret. He said it would be good to discuss the issue in order to learn.
So, if there are physicians who are already helping their patients to commit suicide when it is illegal, what law will make these corrupt physicians stop being corrupt?

On September 7th, 2017 the highest court in New York ruled against Assisted Suicide as a Right in New York State. "

"As the Court explained, "[e]veryone, regardless of physical condition, is entitled, if competent, to refuse unwanted lifesaving medical treatment; no one is permitted to assist a suicide. " Myers v Schneiderin 2017

So, what about abuses and coercions? Have they taken place? The sad truth is, yes and few have been documented where assisted suicide and euthanasia are legal.

OREGON CASES OF ABUSE AND COERCION

CANDICE LEWIS, NEWFOUNDLAND, WHOSE MOTHER WAS PRESSURED BY A DOCTOR

Posted by NYagainstAS at 3:48 PM No comments: